Insight from my Daughter’s School Project

A month ago, my wife told me that Maddy had a school project to create a new character for the Dr. Seuss family.  The character can be drawn on a piece of paper or be done in 2D or 3D image.   I thought to myself,  Why does the school gives projects that obviously the parent will be doing most of the work on?  It would be a waste of my time.   But I did not want to disappoint my daughter and I went along with it.  I asked her to think of a character that she thinks could belong to the Dr. Seuss family.

No long ago, Maddy developed a fascination for giraffes.   We have a giraffe stuffed toy that says a prayer when you press it, which we bought when our first daughter was born.   Maddy decided that it is hers.  Since then she has collected a few more items with giraffes on them.    When I arrived home the next day, she came to me and told me that she had a character in mind.  She told me that it would be a giraffe named OYZ (pronounce OZZIE).  She declared that I could either draw or make a 2D or 3D character and to let her know when I was ready to work on it. 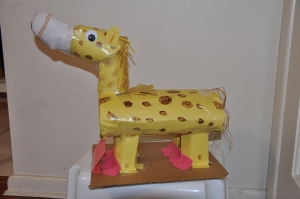 I spent the next three hours thinking how to create a giraffe character that is worthy to be part of the Dr. Seuss family.  Before I went to bed, I had an idea what to create.   Next day, when I came home I told her to get ready and we gathered our materials and I told her that I needed her help.     As we created the character, I would ask questions like, what would the face look like?  Faith was intrigued with what we were doing and she decided to join the fun.   They would take turns telling me the things they wanted and we would try to create it.    Over the next three days, the three of us worked on the project and enjoyed the sharing of ideas.    Maddy and Faith would paint the giraffes and determine the size of the spot depending on the body parts.   We also added a personal touch by creating a snout using Faith’s old sock.   They initially did not think it was a great idea, but later on liked the outcome. 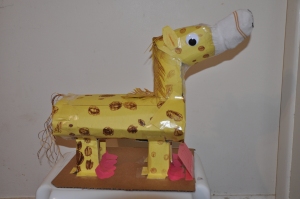 What did I learn from it?

In the end, it did not turn out to be a project that the parent worked on, but rather a project that everyone collectively participated in and enjoyed doing.    Over the next few weeks, Maddy was proud of her character and she would often compare it to the ones that her classmates brought to school.  She would say mine is still the best.   The fact of the matter is it meant less to me that our character is the best than the experience that we three shared while working on it.    It is something that she will remember for a long long time and to me that is what matters the most.

From Bud to Boss